Eight people have been killed in New York while riding their bikes since June, bringing the total number of deaths so far this year to 19. Above a memorial to one of the cyclists killed, Robyn Hightman. Aubri Juhasz/NPR

A memorial site in Manhattan, where Robyn Hightman, a bike messenger was hit and killed by a truck this summer. People have tucked messages of support in the spokes of a bike wheel. Aubri Juhasz/NPR

But the recent surge has led cyclists and transit safety advocates to ask whether the city’s ambitious plan to eliminate all traffic fatalities and severe injuries by 2024 — known as Vision Zero — is making a difference.

In 2014, then newly elected Mayor Bill de Blasio — now a Democratic Presidential candidate — made New York the first U.S. city to adopt Vision Zero. Since then, the number of pedestrian and motor vehicle deaths have steadily decreased. That hasn’t been true for cyclists, despite the construction of more than 300 miles of bike lanes.

Researchers say that in order to bring down the number of cycling deaths, cities need to have a complete network of bike lanes, with as many separated from cars as possible.

Building a new bike lane can take weeks or months and the process can be delayed even further when communities resist these efforts.

Polly Trottenberg, the city’s transportation commissioner, told NPR that they are taking the necessary steps to prevent future deaths and that the circumstances the city is facing are not unique.

New demands are also a part of the equation. Uber and Lyft as well as big-box trucks — fueled by the booming e-commerce industry — pose added dangers for cyclists and put added strain on an already over-congested system.

Many months, many years

Leah Shahum, executive director of the Vision Zero Network — an independent nonprofit that assesses progress in Vision Zero cities across the U.S. — agreed with Trottenberg’s assessment and said the state of cycling infrastructure in New York has less to do with flaws in current policy and more to do with prior decades of inaction.

At the same time, Shahum said the deaths may be evidence that New York is not doing enough to keep pace with the city’s growing number of cyclists.

“For most cities we were seeing slower progress to date than New York was seeing. New York was really ahead of the game in that way,” Shahum said. “And now do you see New York in some ways kind of falling back? We do, but I wouldn’t say that that’s unexpected because there is so much literal territory to cover on the ground redesigning streets, but also the policy change.”

With more people cycling than ever before, setbacks are leading to accidents. According to the NYDOT, the number of daily bike rides more than doubled between 2012 and 2017. Today, nearly half a million cycling trips are made every day.

More people are choosing to cycle for a variety of reasons — concerns about their impact on the environment, frustration with public transit and desire to improve their physical health. The city has also been instrumental in encouraging people to bike, including the massive rollout of Citibike bike shares.

Over the last few years, the city has on average built 62 miles of bike lanes each year — the largest increase anywhere in the country. But, in a city with more than 6,000 miles of streets, fewer than one in five has a bike lane.

According to the New York Department of Transportation, the number of daily bike rides more than doubled between 2012 and 2017. Today, nearly half a million cycling trips are made every day. Aubri Juhasz/NPR 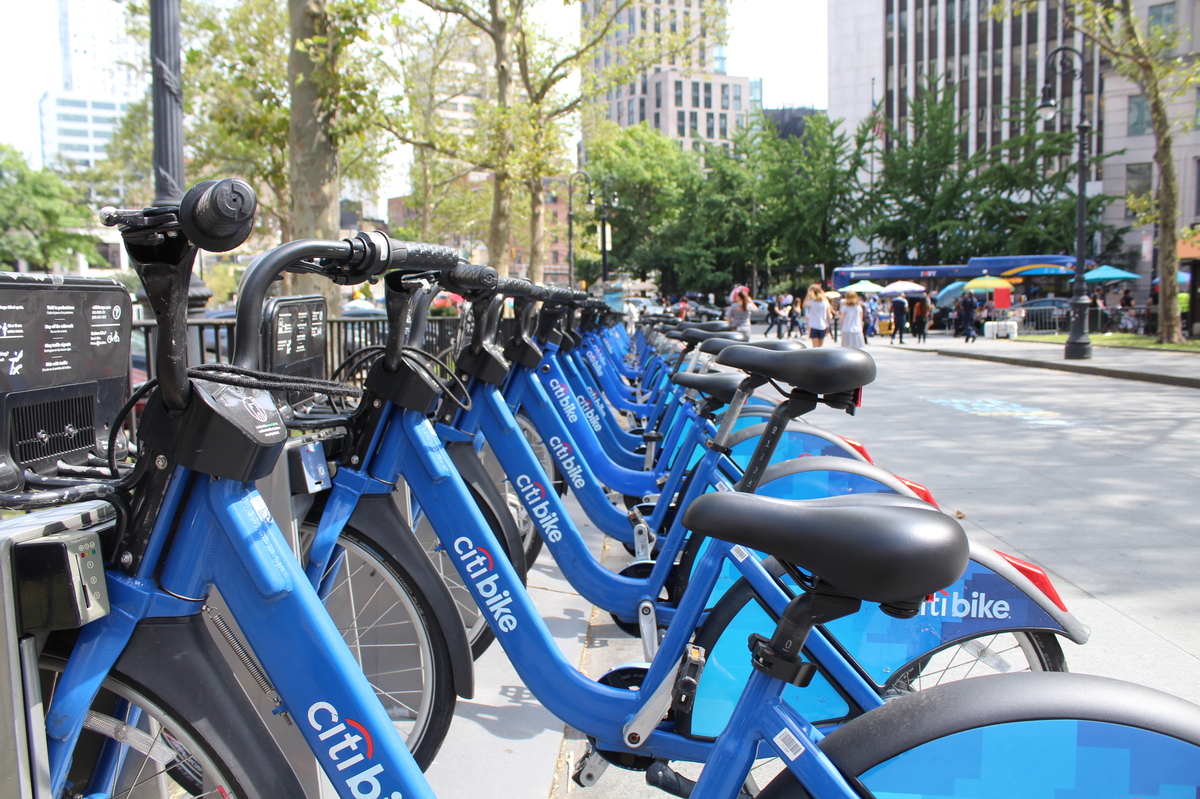 According to the New York Department of Transportation, the number of daily bike rides more than doubled between 2012 and 2017. Today, nearly half a million cycling trips are made every day.

Sophie Maerowitz and Todd Martino live in Manhattan’s East Village and rely on their bikes to get to work, run errands and visit friends — logging more than 50 miles a week each.

They’ve found the city’s fragmented network to be particularly frustrating.

“When you get these incomplete networks you have this situation where great, you have this fresh new bike lane, you’re excited you know?” Maerowitz said. “This infrastructure is working for you and then suddenly it’s gone and you have to go back out into traffic again.”

Not only is it disappointing when a bike lane ends, it can also be disorienting.

“There’s no consistency. One second the lane is there and then it is on the other side of the road. Then it’s gone completely,” Martino said. “You have to be keeping an eye on this, while watching for other cars and keeping pace with traffic.”

Car culture and other opposition

Marco Conner, co-deputy director of the New York City-based advocacy group Transportation Alternatives, says the city isn’t being aggressive enough when it comes to both policy enforcement and the speed of bike lane construction.

“We have the resources for both. It is strictly a matter of political will or lack thereof,” Conner said. “We are only using half measures. We are still seeking the approval of local community boards for far too many projects when we know those projects will save lives.”

He cites two big challenges. The first is addressing car culture and the controversy of removing street parking to make room for bike lanes.

Conner says projects often get postponed — sometimes indefinitely — because of opposition from local community boards. This opposition is not surprising given the United States’ dependence on cars and deference towards policies that protect this dependence. This is often referred to as “car culture.”

New York City has more than 6,000 miles of streets. Fewer than one in five has a bike lane. Aubri Juhasz/NPR 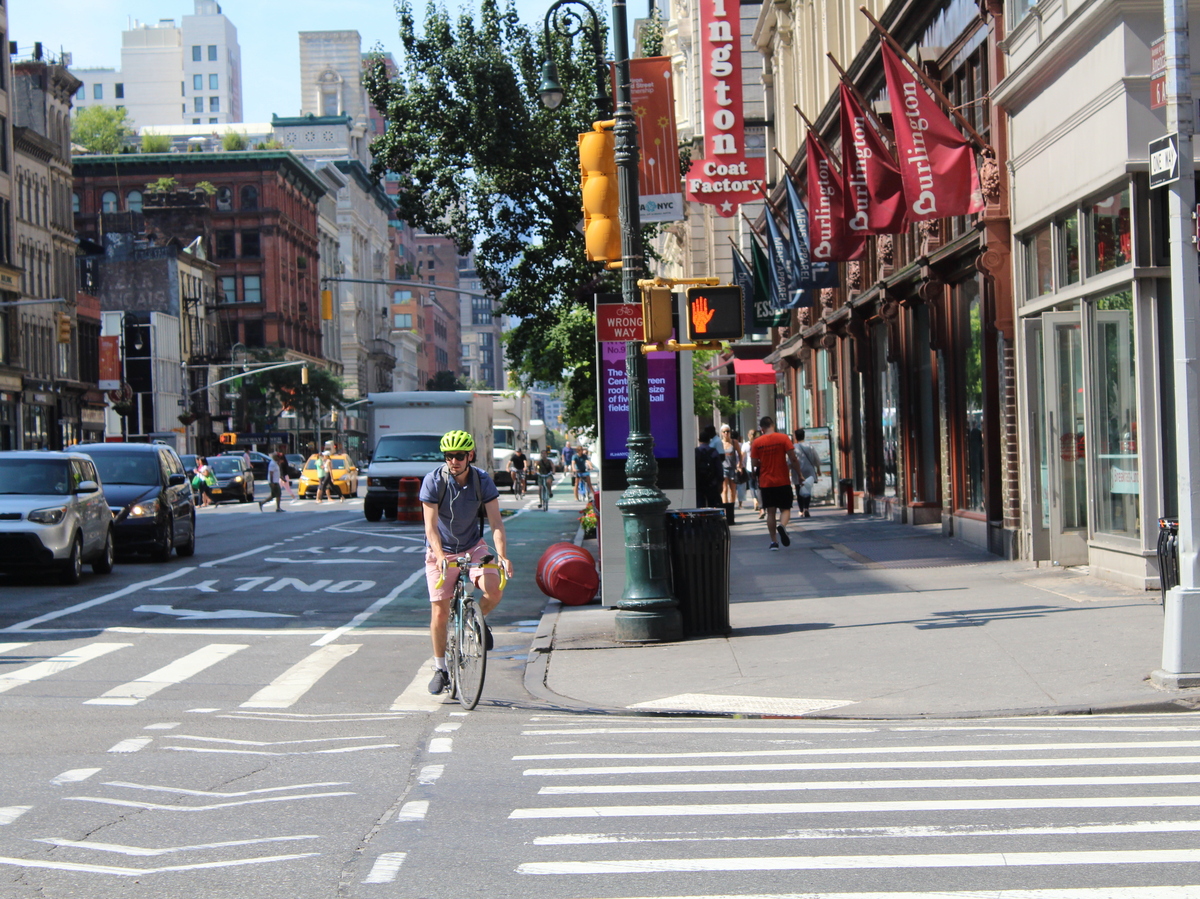 New York City has more than 6,000 miles of streets. Fewer than one in five has a bike lane.

Colin Browne, communications director with the Washington Area Bicyclists Association, says that in all cities this tension — sometimes referred to as “bikelash” — is a major reason why infrastructure change isn’t happening faster.

“This is where American cities are struggling,” Browne said. “You get a lot of pushback. People don’t want to slow down. They don’t want to have to look for a parking space somewhere else just because that space is needed to keep people safe. And so the process gets slowed down as people sort of grapple with the reality of what it means in their day to day life and decide that maybe they don’t support it as much as they thought they did.”

The other problem New York City needs to address is their lack of policy enforcement, says Conner.

The city has been successful in passing several laws that protect cyclists — like lowering the speed limit to 25 mph in most areas and making it illegal to open your car door into a cyclist’s path — but violations often go unnoticed.

Conner says there needs to be more enforcement, not just more speed cameras — which the city has already pledged to install — but also automated ticketing for vehicles that park in bike lanes or fail to yield to bicyclists.

At the beginning of July, after 15 cyclists had been killed, the New York Police Department announced a two-week crackdown on policies that protect cyclists. During this period, the police department reported that 5,673 summonses for vehicles parked in bike lanes were handed out — a 96 percent increase compared to the same period last year.

After the seventeenth cycling death this year, Mayor de Blasio announced that over the next five years an additional $58.4 million will be targeted to building more bike lanes and providing better enforcement in high risk areas.

Marine says that since Vision Zero started five years ago, she hasn’t noticed the streets getting safer — the situation has simply “morphed.” She argues that having bike lanes, but not having a complete network, might actually be making the streets more dangerous for cyclists.

“It’s always been dangerous but now that we have [bike lanes] and people see that there’s a place that we should be, we have to be there. Even if it’s not there,” Marine said. “There aren’t bike lanes on every street. Before there were bike lanes, it was just a free-for-all and the cars knew you were there. We had to take a lane and that was it. But now if you take a lane, people want you back in the bike lane even though it’s not always there.”

Best Cycling Podcasts 2020: 8 you should listen to – Red Bull

Best Cycling Podcasts 2020: 8 you should listen to  Red Bull

More cities want people to bike and walk, but the roads are still dominated by cars.